There are a few business urban legends I’ve heard over the years that I try to trace down. It’s interesting to me because some seem simple to source, but end up being not so simple. I try to find the source for Drucker’s quote “culture eats strategy for breakfast” and a more esoteric one about chimpanzees forming a behavior to stop ladder climbers. I feel like there’s lots of these but, for now, it’s just these two and hope that these notes help save time for future citation searchers.

Trying to avoid passing on rumors

I find that I’m frequently trying to translate concepts and ideas between different groups of people, using metaphors and concepts that both groups can understand and get us closer to a shared idea. However, in trying to get to shared understanding, I don’t want to accidentally insert some fake stuff in that shared reality. A common understanding that includes a lie or inaccuracy can end up taking up lots of time figuring out and fixing. So as much as possible, I like to cite the source for facts and ideas as I think it helps to both encourage better discussion and understanding and to serve as a check on my natural laziness 1 to prevent me from wanting to believe something is true by forcing me to track down and find the citation.

It’s fun to talk about urban legends, but in a professional setting spending time on business urban legends is better spent on working on whatever we’re supposed to work on.

There are two particular ideas that I’ve wanted to use, but never easily been able to find the actual source:

I expect most people know a bit about Drucker so I’ll talk about chimpanzees first.

I don’t think this is real, but I want to use it so much because there are many processes where we can get stuck in a circular reasoning loop of “I do it because it’s always been done. It’s always been done this way because we do it this way.”

Of course, using first principles analysis helps to break out of this loop, but it’s such a nice story to illustrate the potential history of how we can get stuck in these situations.

I wanted to use this in a speech, and spent a few hours trying to find the source and never did. Not only can I not find the experiment, I can’t even find the person to first tell the story. I hate not being able to give credit to who invented stuff.

For example, here’s a cartoon version of the story I found on Skeptics StackExchange but I’m not sure they created the image, they were just asking about it. And a google reverse image search on the imgur link gives lots of hits, but no clear provenance. 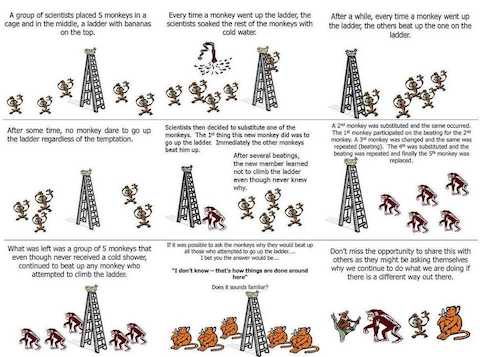 Skeptics StackExchange User Flimzy seems to have the closest answer in finding a book by Galef in 1976 that references a paper by Stephenson in 1967. The experiment isn’t as described but seems true in principle. Flimzy links to the Galef book in Google books, but finding the journal article is a pain.

The citation in Galef’s book, Social Transmissions of Acquired Behavior_, is…

But googling for a fifty year old journal doesn’t let me find the journal and directly download. I find something with that title on scribd with a date of 1966, but I’m not going to sign in to download it. And I wouldn’t want to force anyone following my citation to have to sign up for scribd just to check my work or follow my research. Thankfully other bloggers have been down this path and Erik Buys’ post includes a helpful link to a PDF of the article that he hosts on wordpress that is at least easy to download and looks like the real article. Thanks Erik, wherever you got this.

Although I would feel kind of off with a citation like…

So this business urban legend ends up being partially true, but in the actual experiment it’s not as “juicy” and is a harder story to tell accurately. On page 284, Stephenson describes the experiment so a conditioned monkey stops a newcomer from interacting with the “banana” equivalent from my chimpanzee story, and the newcomer doesn’t interact with it. And air blasts were used rather than freezing cold water, But at least there’s always someone who knows the reason not to interact. Sadly, they didn’t continue on with a third monkey who never received the air blast to stop them. And there’s some sex in this real version…

Knowing the potential origin of this urban legend at least lets me feel like less of a fraud, but still doesn’t let me stick to my plan of always providing a citation to the original source. Maybe if I’m lucky, someone like Gladwell can write a book and describe the experiment, but I don’t think having a citation to a Gladwell book is very good for establishing ethos and shared reality.

I think I first heard the quote way back in business school and must have heard this hundreds, or thousands of times. So much so that I wouldn’t want to use it in a presentation for fear of boring the audience. But I wanted to cite it in an internal analysis note to try to make a case for assessing potential strategies proposed with organizational and partner culture. Basically just a general pointer that this isn’t a random idea from me, but something that is sort of baseline in strategic plans.

But, oddly, this was harder than I thought to actually cite where Drucker brought up this idea and after googling for an hour or so I discarded the idea and didn’t end up using the reference. It was interesting how many sites quote this without actually referencing a book or paper or article from Drucker where he says this.

This was a few years ago and now we have the wonderful work of the Quote Investigator web site that I am so grateful for tracing down and investigating where these things come from. They go back as far as 2000 with a reference to an unnamed person from the technology consulting firm, Giga Information Group. So it seems no one knows the actual person who came up with this quote but doesn’t seem to be Drucker and likely isn’t anyone where saying the name would convey any authority. I certainly can’t think of an audience where quoting Giga Information Group (or even their founder Gartner or the Gartner firm) would be very helpful in establishing ethos. It’s probably the equivalent of quoting wikipedia as the sole source for an idea, rather than a collection of facts.

Not sure why this is misattributed to Drucker, but I think because so much of Drucker’s good management books do seem to have the general idea that culture is more important than any distinct action. Of course, he worked in management and so it makes sense that he would write about how the people of an organization and collected culture was the most important thing to work on.

It’s funny because my own memory made me think I had heard this in the 90s in business school and again in the early 2000s. If Giga coined this expression, I couldn’t have heard it in the 90s and it was pretty unlikely that I heard it in the early 2000s. Just another example of how memory cannot always be trusted and citations are even more helpful.

This all seems to head toward why I like to cite and trace the citations of others because it helps to actually understand what the underlying basis is for things. It’s boring, and I frequently want to skip it, but is worth the time spent. Both to help others not have to go through the effort to find sources and also to avoid misusing and further the spread of misinformation, even accidentally.

Steve Yegge’s excellent Google Plus post about platforms references an Amazon “Big Mandate” email that made people use APIs or they would be fired. I’ve never found a real copy of this email and would like to know how much is true and how much is conflated. Comically, Yegge’s post is harder to find because of the Google Plus fiasco and now relies on people rehosting. One of many examples why archive.org and the ideas around ipfs are so important so information doesn’t get lost, or worse, slightly and imperceptibly modified.